Kathmandu valley tour offer Kathmandu Tour, Holiday tour in all around Kathmandu city with a local expert tour guide as per your interest language.

Kathmandu's Durbar Square is one of three durbar (royal palace) squares in the Kathmandu Valley. It is the site of the Hanuman Dhoka Palace Complex, which was the royal Nepalese residence until the 19th century and where important ceremonies, such as the coronation of the Nepalese monarch, still take place today. The two-hectare (five-acre) palace complex is divided into two main chowks, or courtyards, and was initially constructed in the 16th century, although subsequent additions were made in the Shah (Gurkha) dynasty in the 18th century and by the Rana rulers in the 19th century. The palace is decorated with elaborately-carved wooden windows and panels and houses the King Tribhuwan Memorial Museum, dedicated to the monarch who opened up Nepal to the outside world, and the Mahendra Museum, dedicated to his son, King Mahendra. It is also possible to visit the State Rooms inside the palace. At the southern end of Durbar Square is one of the most curious attractions in Nepal, the Kumari Chowk. This gilded cage contains the Raj Kumari, a young girl chosen through an ancient and mystical selection process to become the human incarnation of the Hindu mother goddess, Durba. She is worshipped during religious festivals and makes public appearances at other times for a fee paid to her guards.

Swayambhunath the golden spire of the 5th-century Swayambhu stupa is adorned with a colourful fluttering of prayer flags; it crowns a hill overlooking the Kathmandu Valley and offers fantastic views over the city of Kathmandu. Swayambhunath is one of the most recognisable symbols in Nepal and the painted eyes of Buddha watch all who ascend the worn stone steps. It is a World Heritage Site and one of the holiest Buddhist sites in Nepal, and is at the source of the Valley's mythical beginning. Legend has it that the history of the Valley began with the draining of an ancient lake by an Enlightened Being to reveal the Valley and a lotus flower was transformed into the hill and the shining light became the stupa itself. Swarms of pilgrims and red-clad monks circle the complex, spinning the prayer wheels, while the scores of monkeys that give the temple its nickname, Monkey Temple, prance about in irreverent groups. Interestingly the temple complex is scattered with shrines and statues of Buddhist and Hindu deities and the assortment of pilgrims from both faiths characterises the country's unique religious harmony.

Patan is 15 minutes drive from Kathmandu. Lalitpur, the city of beauty is separated from Kathmandu only by the Bagmati River and is the second largest town in the valley. Lalitpur is fragmented from other cities due to its substantive architectural ancient masterpieces. Patan's central Durbar Square is absolutely packed with temples: Its an architectural center point with a far greater concentration of temples per sq. meter than in Kathamandu or Bhaktapur.

Krishna Mandir which is one of the grandeur of the square was built in 1637 by the king Siddhinarsingh Malla. The entire temple is constructed from the stone. Golden Temple which is the unique Buddhist Monastery was founded in the 12th century which is a large rectangular building has three roofs and a copper gilded facade with the images of Buddha and Avalokitesvara where there are Buddha images and illustrations on the walls. The square has been unrestrainedly adorned by the Bhimsen Temple, Manga Hiti, Vishwanath Temple, Jagannarayan Temple, Golden Temple and numerous. Take the pleasure of discovering this Patan Durbar Square which has been entitled in the World Heritage Site.

Visit Pashupatinath and Bouddhanath
Not only is Pashupatinath the most important Hindu temple in Nepal, its one of the most important Shiva temples on the subcontinent and draws numerous devotees from all over India each year. Pashupati is considered to have a special concern for the kingdom of Nepal. Pashupatinath, an ancient plinth, by the banks of the holy Bagmati River, stands the 16th century of Pashupatinath - Shiva, as Lord of all Creatures. The old buildings on the site were destroyed by Moslem invaders in the 14th century, its stone linga smashed to dust, but it rose again behind their retreating backs. Succeeding monarchs reinstated the temple and the images. The flowing Bagmati is a holy river and the ghats (crematorium) at its bank are the earnest Hindus truest cremation center.

Bouddhanath is among the largest stupas in South Asia, and it has become the focal point of Tibetan Buddhism in Nepal. The white mound looms thirty-six meters overhead. The stupa is located on the ancient trade route to Tibet, and Tibetan merchants rested and offered prayers here for many centuries. When refugees entered Nepal from Tibet in the 1950s, many of them decided to live around Bouddhanath. They established many gompas, and the "Little Tibet" of Nepal was born. This "Little Tibet" is still the best place in the Valley to observe Tibetan lifestyle. Monks walk about in maroon robes. Tibetans walk with prayer wheels in their hands, and the rituals of prostration are presented to the Buddha as worshippers circumambulate the stupa on their hands and knees, bowing down to their lord.

Bhaktapur Durbar Square is a conglomeration of pagoda and shikhara style temples grouped around a fifty-five window palace of brick and wood. The square is one of the most charming architectural showpieces of the Valley as it highlights the ancient arts of Nepal. The golden effigies of kings perched on the top of stone monoliths, the guardian deities looking out from their sanctuaries, the wood carvings in every place-struts, lintels, uprights, tympanums, gateways and windows, all seem to form a well orchestrated symphony. The main items of interest in the Durbar Square are:

The Golden Gate: The Golden Gate is said to be the most beautiful and richly moulded specimen of its kind in the entire world. The door is surmounted by a figure of the goddess Kali and Garuda (the mythical man bird) and attended by two heavenly nymphs. It is also embellished with mythical creatures of marvellous intricacy, In the words of Percy Brown, an eminent English art critic and historian, the Golden Gate is the most lovely piece of art in the whole Kingdom: It is placed like a jewel, flashing innumerable facets in the handsome setting of its surroundings. The gate was erected by King Ranjit Malla and is the entrance of the main courtyard of the Palace of Fifty five Windows.

The Palace of Fifty five Windows: This magnificent palace was built during the reign of King Yakshya Malla in A.D. 1427 and was subsequently remodeled by King Bhupatindra Malla in the seventeenth century. Among the brick walls with their gracious setting and sculptural design, is a balcony with Fifty five Windows, considered to be a unique masterpiece of woodcarving.

Day 01: Arrival
Meet us at the airport, transfer to Hotel. Rest.

Day 02: Kathmandu
Visit Kathmandu Durbar Square, the place of the Malla and then the Shah Kings of Nepal, visiting Kumari Temple, house of the virgin goddess, visiting Swoyambhunath, a stupa on the top of hill - from here you can overlook the scenery of Kathmandu, Visiting Patan Durbar Square, the second largest town in the valley, Krishna Mandir, Golden Temple etc.

Day 03: Kathmandu – Nagarkot
Visit Pashupatinath Temple, one of the most important Hindu temple in Nepal. We keep going for walk to see the huge of stupa of Buddha, also known as Bodhanath, the largest stupa in Nepal. Afterward taking a ride to Bhaktapur, a fascinating town, visit Bhaktapur's Durbar Square featuring the Victorian illustrations style with temples and temples complex.

Day 04: Departure
Free till departure, transfer to airport, fly back to Home. 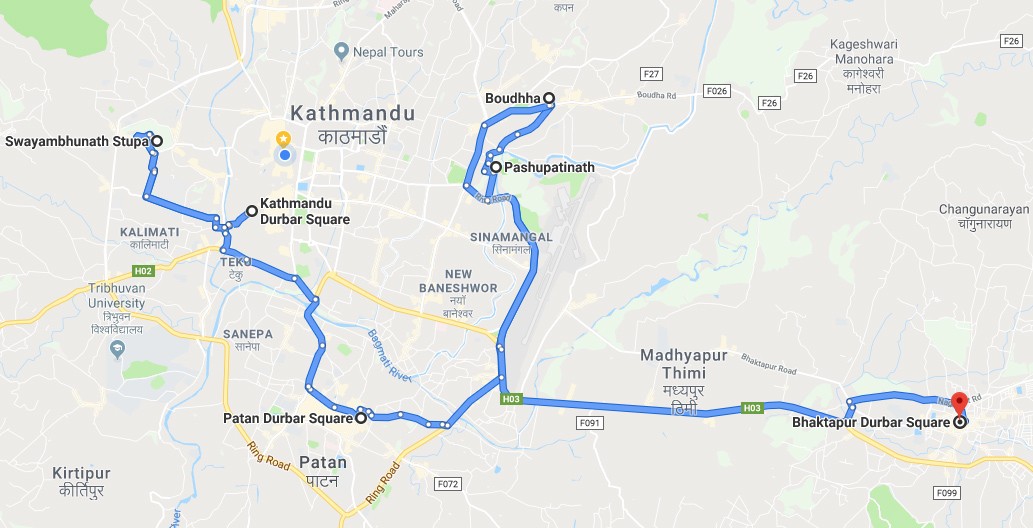 Please feel free to contact us. We will get back to you in 24hrs. Or direct contact at Cell: +9779851081841 (Whatsapp/Viber etc.) or Mail: info@nepaltoursdestination.com

Why Travel with Us ?

Kathmandu, a living museum city has been a cultural hub of Nepal for thousand of years; it is then unsurprising that thi...

This prestigious tour is a combination of cultural and natural appreciation. In Kathmandu valley and around, you will be...

Asides from a discovery of harmony of Buddhism and Hinduism in and around the Kathmandu Valley, you are granted a chance...

Nepal, the land of splendid nature and rich culture is waiting for you exploration through its different facets. Explore...